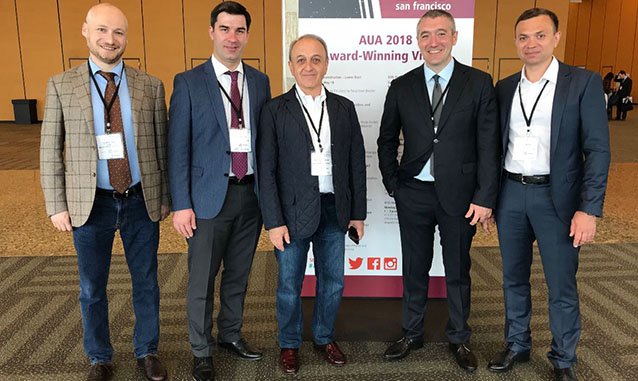 Sechenov University presented a total of 9 reports at the American Urological Association’s Annual Meeting, the oldest forum that is among the most prestigious meeting platforms for medical professionals in the world. This year, the conference in San Francisco attracted over 10,000 participants.

The presentations of a team of Sechenov University researchers led by Professor Leonid Rapoport were dedicated to challenging aspects of laser surgery in Urology and shockwave therapy for erectile dysfunction. A video presentation on laser treatment of bladder cancer was awarded best video.

Dmitry Enikeev, Deputy Director for Science, RI for Uronephrology, pointed out that it was the first time that Sechenov University urologists had presented results of large-scale multicenter international studies contributed to by Professor Andreas Gross (Hamburg, Germany) and Olivier Traxer (Paris, France).

“Our university has taken the lead in some areas, namely breaking up stones with thulium laser; is well equipped and has our scientific work personally supervised by the rector, Petr Glybochko, which arouses the interest of the international scientific society. Leading experts from all over the world participating in our research projects only aid in attracting even more attention to the Sechenov University,” said Dmitry Enikeev.

The meeting in San Francisco is the second large international forum where Sechenov University researchers have presented their findings this year. At the Annual Meeting of the European Association of Urology in March, they had 12 presentations ranking the Sechenov University second among all the participating educational institutions.